“Excuse me! Do you have a moment to talk about our Lord and Savior, Dawoon?”

I’m kidding! So here’s my review on WDTFS Chapter 60. As in any review post, be warned! Spoilers ahead.


With Sungji and Sumin in a sort cool-off phase, another new character has appeared to re-enter Sungji’s life. The girl’s name is Dawoon.

Dawoon has returned to Korea after studying in France. She meets Sungji and took the opportunity to catch up on things after not seeing each other for quite a while. She told our beloved blonde that she recently broke up with her girlfriend who never really loved her at all.  There were a few flashback panels that show Dawoon and Sungji riding on a bike together which means that they have been friends since they were younger.

It was raining very hard and regardless of their current status, Sumin had to rush out of the office just to offer Sungji her umbrella. However, she was welcomed with the sight of her lover being with Dawoon together in one umbrella walking home.

I have to be honest here: I was very hesitant to write my reviews on chapters 57, 58, and 59 because of how much of an emotional roller coaster they were for me. This chapter was just right and I love how Team Gaji placed another character just to make the entire story interesting.

Think about it: if we only just focus on Seju, Sungji, and Sumin, there will come a time that everything would just go around in circles (as experienced in some of the previous chapters). Regardless of which team you are rooting for, I think it won’t hurt giving Dawoon a chance. It’s understandable that she only appeared so far in one chapter so this might take a while for us to get to know her better (if ever she really plays a vital character card in the story). 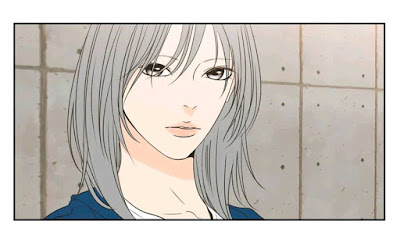 For now, let’s appreciate her a bit most especially her grey hair and that mysterious aesthetic she possesses. I can look at her panels all day. Friends who have seen my Dawoon appreciation posts would really attest to this. Here’s one of the many. Onwards to Chapter 61 (which is set to release this October 18th!)

Previous post Pulse Chapter 27 (Long OVERDUE Review Edition + Some Updates) – The Intensity is Real
Next post What Does The Fox Say Chapter 61 Review – Our Lord and Savior, Dawoon (Part 2)