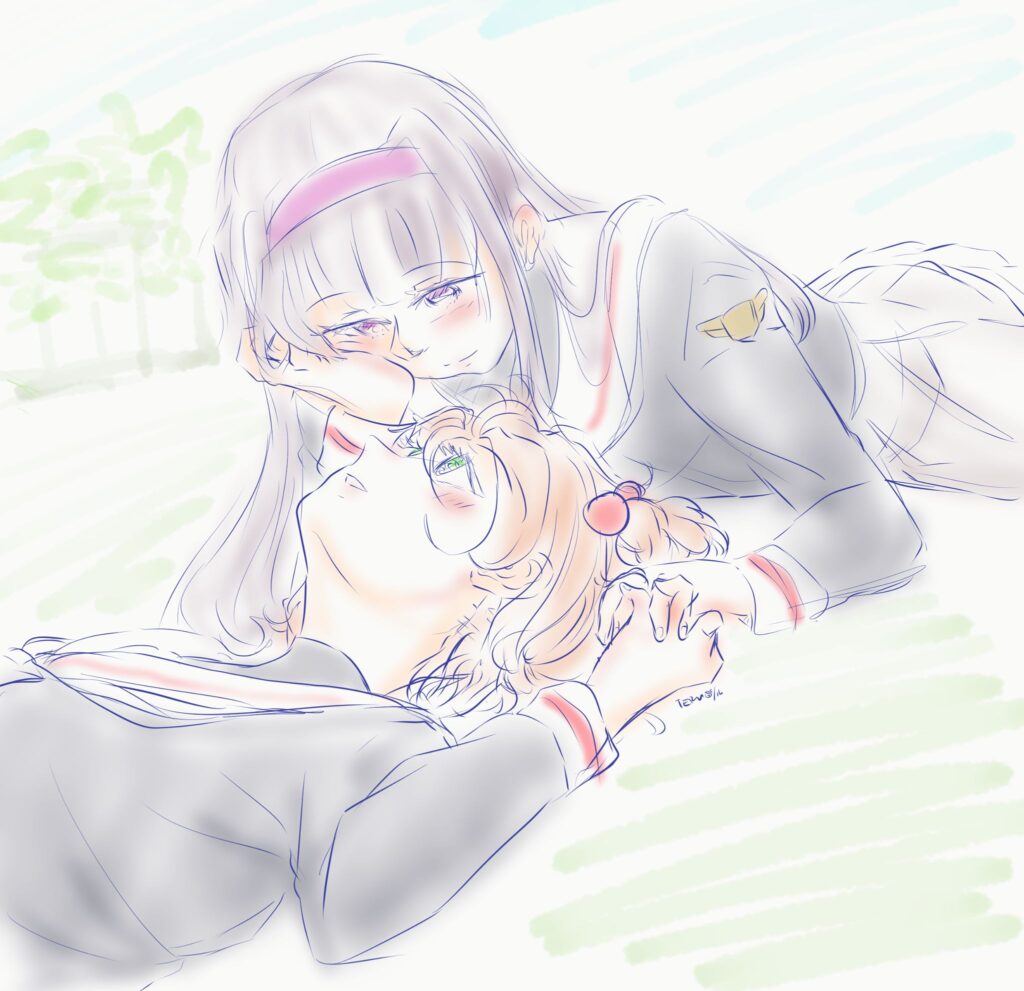 It was sunny in Tomoeda. Sakura and Tomoyo were, as usual, went home together after a very tiring day. Tomoyo prepared for a big choral competition, while Sakura had to recover after days of continuous cheerleading practices. They usually tag along with their other friends going out the campus—but today was slightly different.

“Competition is tomorrow, right?” Sakura asked as both she and Tomoyo walked going to Penguin Park.

“Yeah,” Tomoyo smiled, “I’m honestly nervous since the song was something that we never used in the previous competitions.”

“Umm… yes,” Tomoyo blushed, “It’s… actually an original song.” She then shook her head and continued, “It… it took me a while to get it right. I hope I don’t mess it up.”

“Why would you mess it up?” Sakura wondered, looking at Tomoyo with a confused face. It was the first time she has heard something like this from her. It honestly wasn’t like her. “I mean, you always sing perfectly, Tomoyo-chan.”

Tomoyo couldn’t give a reply to Sakura’s question anymore as they both arrived at the park. It was perfect. No one was around yet, and the Cherry Blossoms were slowly blooming.

However, Sakura was honestly worried for Tomoyo. It puzzled her as to why, of all people—why would Tomoyo be nervous over something she’s good at? She has witnessed her best friend nailed every song she performs. Not once she heard anything from her that she felt pressured and anxious over singing before. These thoughts clouded her mind that she almost forgot about why they were at Penguin Park.

Spring is here. That afternoon was perfect. They wanted to unwind before the park is filled with people who would drop by to witness the blooming Cherry Blossom trees in the area.

Sakura immediately zapped back to reality when Tomoyo held her hand and pulled her onwards to one of their favorite grassy spots in the park area.

They both rested there enjoying the calm afternoon. Both of them never spoke a word. However, Sakura felt that she had to open up something to Tomoyo.

“Tomoyo-chan.” She began, looking at the sky as she laid down on the grass, “I received a letter from Syaoran-kun yesterday.”

As she was about to lay down on the grass beside her, Tomoyo paused with a bit of concern. It has been a couple of months since Li left for Hong Kong, and she noticed that he hasn’t been sending letters to Sakura like usual.

“There’s no definite date of when Syaoran-kun will come back,” Sakura continued, “…and honestly, I don’t know if waiting this long is worth it anymore.”

Hearing that broke Tomoyo a bit. If there is one thing that she doesn’t want to hear or witness, it’s seeing her best friend sad and giving up on what she has been hanging on to.

In the first few weeks since Li left, there was never a day that Sakura would miss opening a conversation related to him. But as days go by, the anticipation for his next letter to Sakura became less frequent. According to Sakura, the reason was because of the many family obligations he had to deal with.

There was a bit of relief in Tomoyo that Sakura no longer opened up about him anymore. To her, it was for the best. She is willing to do anything to keep Sakura’s smile—even if it has to do with keeping her hidden feelings to herself.

Tomoyo then knelt on the grass, her purple eyes still focused on Sakura. She then dropped it: “But, you still love him…right?”

Before she could utter a reply, Sakura took a deep breath and closed her eyes. It was true—she seemed to have lost hope of seeing Li again. She was confused if she felt stupid in holding on to these feelings for him or if she is just selfish that she had to let go. The past few months were emotionally stressful for her.

Her thoughts went running about.

She then opened her eyes. Instead of the sky, she saw something that was even more breathtaking.

Innocent lavender eyes locked to hers. It was the first time seeing Tomoyo’s face up close in this view. The long pause for an answer might have worried her, so she had to lean closer to check if Sakura was alright.

Sakura froze. She felt her heart beating loudly. Her hands were rested on the grass, but it felt like they were getting warmer. She held her breath as she looked at Tomoyo’s face. She was beautiful. Those eyes were warm, peaceful, and lovely. She wanted this moment to stay longer. All her worries, the stress, the disordered thoughts of unsure feelings were all forgotten for a while. Those eyes. It was like Sakura was staring at Tomoyo’s soul.

Sakura knew. She knew what Tomoyo yearned for. It was more than just friendship. She knew that her best friend has been keeping such feelings for so long.

Her thoughts then went running again.

“Sakura?” Tomoyo called, trying her best not to blush a lot in front of her.

When she heard her name, Sakura went back to her senses. Today wasn’t the day to think about these things. This isn’t the right time to know what these feelings are.

I just wanted to be with her today. That’s why. She thought.

Sakura finally let out a warm smile. “I’m sorry. It’s not the right time to talk about these things.”

“Today, I just want to hear you and only you, Tomoyo-chan.”

“Sakura-chan…” Tomoyo’s eyes grew wide. She then laid down beside Sakura, still looking at her. She then held Sakura’s warm hand as they enjoyed the calm breeze on that beautiful afternoon.

The world was too overwhelming for them at the moment. Figuring out those feelings can be left for another day to tackle. Right now, they have each other. The warmth of each other’s hand was enough to forget about the world for a while, and Sakura only wished to hear only one person’s voice alone.

“So… can you sing that new song for me now?” Sakura requested as she smiled at Tomoyo,

Tomoyo then replied, still looking at the face of her most precious person in the world. “Of course. You know that I will only sing for you, and only for you, Sakura-chan.”