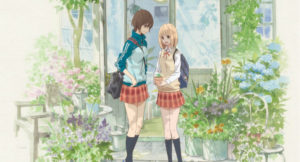 An announcement posted by the official Kase-san animation Twitter page on Monday revealed that Pony Canyon will be holding the US premiere screening of Kase-san and Morning Glories (Asagao to Kase-san) Original Video Animation (OVA) on Sunday, July 8 during the Anime Expo weekend. 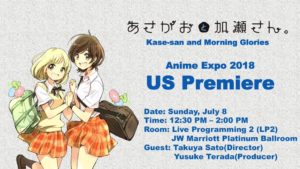 The premiere screening will be held at the JW Marriott Ballroom from 12:30pm to 2:00pm. Special appearances during this special event are none other than the OVA’s Director Takuya Sato and Producer Yusuke Terada! Autograph sessions will also happen with details to be announced the soonest.
Based on the popular yuri manga series Kase-san by Hiromi Takashima, the story is about a timid girl named Yui Yamada falling in love with the athletic and boyish Tomoka Kase. It follows their growing relationship while facing its ups and downs together.
Source: asagao_anime (Twitter), Anime Expo
The Lily Cat is your source for the latest updates and reviews on Yuri, GL, anime, manga, cosplay, and more.