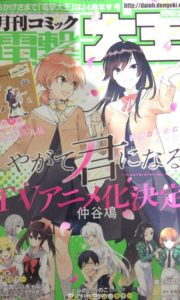 Just a few days before its 3rd anniversary, yuri fans it’s time to rejoice as Nio Nakatani’s manga series Yagate Kimi ni Naru will be having its own anime adaptation! This was confirmed in the cover of this year’s Dengeki Daioh June issue.

Yesterday, a banner was posted for a while in the magazine’s website which made yuri fans speculate of a possible anime adaptation announcement. The direct link to the banner disappeared around 7:30am GMT+8 on Wednesday.