In a recent announcement released by the Lezhin Comics (Korean) website, Lezhin Entertainment will be shutting down its web novel platform service.

It will effectively close on October 1, 2017 and the site staff is encouraging those who bought web novel chapters using Lezhin Coins to purchase the remaining chapters and finish reading their favorite novel series before the shut down date. A special 50 bonus coin offer will be given to those who have bought chapters in the said service. Below is a screenshot of the announcement (Korean): 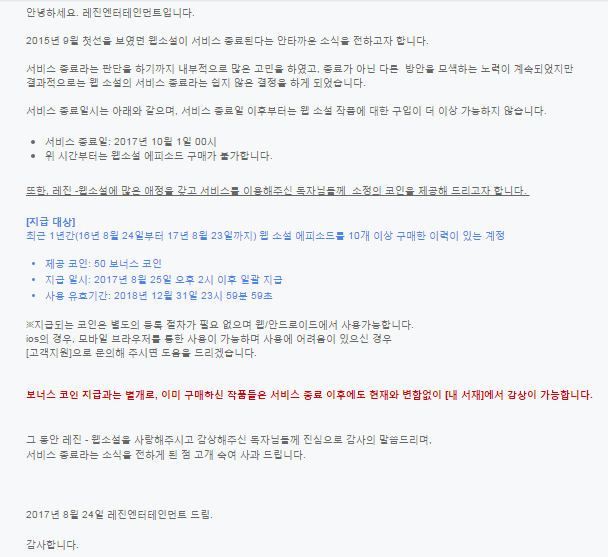 The web novel service of Lezhin began on September 2015 and had openly expressed that the platform has been struggling to get profit despite efforts of advertising and promoting it.
There is still no word if the novel chapters can be saved or transferred to another site. Online users (especially in Twitter) have expressed their shock, disbelief, and disappointment that the service will be closed. Word have also surfaced that the authors and artists for the web novels have not been properly informed about the closure. You may follow the conversations on Twitter by searching the hashtag #레진웹소설종료
Those who are following Lezhin’s Webtoon series need not worry for the service is still up and running. However, users are encouraged to purchase the chapters legally via Lezhin Coins as a way to support the artists.

If anyone is wondering what’s going on with lezhin, well they announced that they are no longer providing novel service on the website.

You may visit Lezhin Comics in either English, Korean, or Japanese.